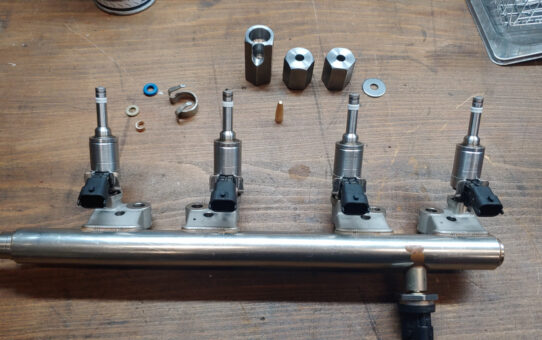 Recently my wife bought a new car. I was really happy she went for an Italian beauty instead of a boring German car. We bought a Lancia 1.8DI with “some work” and issues… In this blog post I share some information regarding the direct injection system.

Our Lancia Delta 1. 8 DI has a direct injected Bosch system. The same engine is used in the Alfa Romeo Brera, 159, Spider and in some more advanced form the Guilietta QV and 4C.

If you look at the crankcase of this engine it has suspicious similarities to some GM crankcases though, it seems they shared some parts at the time.

Some of the parts used on the injection system of the 1750 tbi 1.8 DI engine:

When removing the injectors you should replace the seals before mounting it back. The seals seem some kind of teflon material and you have to use a mounting set. I made one myself, you need a conical reamer and a lathe. You can also find a mounting-set online.

One of the issues with the direct injected systems is leaky injectors. Every time you park your car and switch off the engine some gasoline drips out of the injector and finds its way to your crankcase passing the cylinders and piston rings. This will damage your engine in time, this is also why the engine oil is high specked.

I found some special racks you can use to place your injectors in an ultrasonic cleaner online but I did it DIY style, this way you prevent cleaning solution entering the injector. I used Tickopur R 33

The fuel injection is directly into the combustion chamber like a common-rail diesel engine. A high pressure is necessary to be in time and overcome combustion chamber pressure. Up to 150 bar! If the fuel pump of an Alfa / Lancia engine breaks down you are f#cked, its a 1200 euro part and its not repair-able!

Because I had suspicions regarding my high pressure pump I was looking for a solution to avoid going bankrupt. Especially because I was not sure if it was broken or not. Usually the electrical part of the metering valve breaks down, unfortunately it is not replaceable. Sometimes the piston breaks, its the part touching the cam follower.

I searched a very long time to find a second hand replacement, i kind of gave up when finding out second hand is also expensive. When searching for a second hand pump I noticed the Bosch direct injection system is used on various other engines from other brands so I googled Bosch parts starting 026520000 to 026520400 hooping to find something useful. As a result I found several pumps and some seemed particularly usable. Most engines have basically the same power, I found similar pumps on Mercedes, VAG, BMW, Mini, Ford, GM/Opel, and Saab. The piston following the cam seems the same on any version nevertheless the low pressure and high pressure connections vary, as well as as the electrical connection although they all have similarities. The VAG ones where all useless because of inverted connections.

I found 2 pumps that might do the trick. The first one is a pump from a Mini Countryman with Bosch number 0261520289. The advantage over the other pump I found is the high pressure full side. It looks identical. The downside of the Mini pump is the rest, electrical connection is different (has to pins though which is the same) and the low pressure side is on top of the pump instead of on the side. It might just work if you can find a fitting electrical connector and do some soldering, the low pressure side should also fit because its a rubber hose.

I choose the other one because I found a Saab/Opel pump very cheap. This pump is used among others in a Opel Insignia but it is also used in other General Motors products. The Bosch product number is 0261520072 and GM OEM number 12629135. New they are around 350 euros which is way less painful to your car-wellness budget.

I was lucky because I found one second hand but never used for just for 100 Euro’s (which is around 120 dollar in Yankee dollars). A company specialized in crate engines took it from an unused engine. The only disadvantage is that the threaded connections are 3 mm higher but that turned out to be no problem at all. On the low pressure side no problem just a direct fit. On the high pressure side some bending of the metal fuel line did the trick. The electrical connection is 90 degrees turned upwards on the GM pump but it will fit nonetheless. You need to fiddle a little with the foam on the engine cover though, I removed some to avoid contact.

No! 🙁 Unfortunately it did not solve the issues on the full pressure error nevertheless it excluded the pump as a defect. When I looked more thorough I noticed removing the connector made my engine run quit decent. When connecting it again it suffocated the engine so when examining the values using Multiecuscan I noticed the output voltage of the sensor was above 4 volts. Strange because the value should be in between 0.5 by low pressure and 4.5 at high pressure, if the engine is idling the pressure should rather by low than high.

When I replaced the sensor it ran perfect. Yes finally! Thinking about it I remember throwing the complete full-rail with the sensor in my ultrasonic cleaner which is a big fail! I found out the sensor is quit delicate, the ultrasonic waves probably killed it.

I hope this blog post will be helpful for you, please drop me a message bellow if it did.