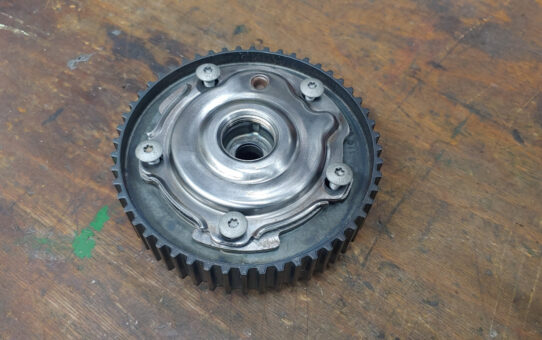 After finishing the cam, turbo and cylinder head repairs I thought the car would run like a sewing machine but despite of all the repairs there was still a rattle near the cam-belt. This is a big bummer because I practically replaced most engine-parts.

Using an engine stethoscope I was able to isolate the rattle near the intake phase-adjuster / camshaft adjuster, part number 55215216. This phase-adjuster changes the position of the cams using oil pressure from the oil-pump using a valve. The oil pushes multiple vanes inside the pulley forward or backward so the cam-position changes.

Part number for the exhaust is 55215215 and the inlet 55215216. Both parts are pricey and rare but nevertheless still available.

If the phase adjuster is worn a rattling sounds can be present, on lower rpm you will hear a mild rattle, on startup a loud rattle disappearing after a few seconds. By removing the cam-belt and locking the cams with the locking-tools you can feel the play in the pulley. Sometimes if they are totally worn out you might also be able to move the pulley a full 15 degrees, the locking pin or spring might be broken in that case.

Even if the play is not that bad in locked position the vanes may be worn out internally, the system will not work properly and rattle.

Removing the part is the same as changing a distribution. Unfortunately you have to go trough the entire process of removing and placing the cam-belt starting with the right front wheel, inner fenders, engine mount and locking the cams and crankshaft.

The cam position adjuster can break down on several ways for instance; the locking pin or spring can snap, the vanes can wear out or in some other occasion you might be lucky and the oil pressure valve is broken. In the last case you also get error messages for the cam position. When there is a rattle changes are high your phase adjusters are worn out.

Although the cover of the part has a big “Do not open” engraved on top, I did it anyway because of science 😉 admitting doing so after buying and mounting a new one. When reading a forum thread on Alfaowner posted by a Hungarian member Shadin from Budapest I stopped hesitating and bought a new adjuster right away! He wrote about his findings when his 159 1750 tbi had similar issues and tried fixing the broken locking pin. It did not solve the rattle consequently he ended up buying a new phase adjuster for the inlet. And just like my wife’s Delta his car was free of rattle right away.

It’s a totally different car right now in other words it seemed the broken adjuster made the car a lot slower, hard to start and noisy. Finally my wife cab enjoy the car in its full potential especially when flooring the gas pedal!

Before replacing your variators please check the oil seal issue. Part 55589549 is in between the oil-pickup pipe and the oil-pump. They tend to leak and if it does the oil-pressure is to low to operate the variators properly than again when pressure if low the rattling variators is the least of your problem….