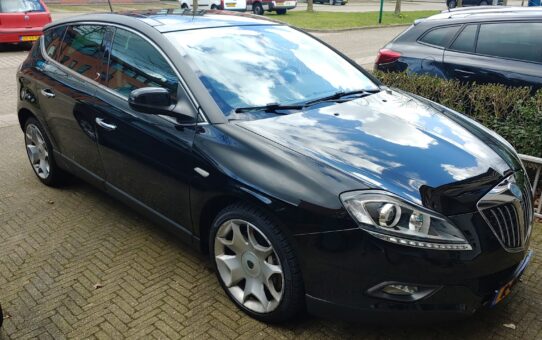 Disclaimer; this is a very long blog post only interesting if you own a Lancia Delta 1.8 DI or an Alfa with the 1750 tbi engine.

Fortunately my partner choose an Italian beauty when it was her turn to get something pretty. After owning a Fiat Punto for several years she wanted something bigger and more luxurious. I tried selling her the idea of getting her a Fiat Bravo 1.4 multiair but you know women… a “no” will never change to “maybe” or “yes”.

After test riding a few Giulietta’s and feeling it was a bit to small in the back she made up her mind and started looking for a Lancia Delta, related with the Bavo and the Giulietta but with a 10 centimeter longer wheelbase a lot more roomy than the other 2.

There where some “demands” though…

It was a bit hard o find one, some of them where withing specs but in poor condition, others looked awesome but missed the panoramic roof.

After a few months finally, a black and beautiful Delta 1.8 DI with 200 horses! It was imported from Switzerland and when inspecting it there where some issues. From the outside and inside it looked great but the engine smelled like cooling liquid, leaked oil all over the place, heavy sludge buildup inside the engine and the valve variators rattled when idling. The seller agreed about the car having issues and sold me the car for a reasonable price.

Issues with the Lancia Delta 1.8 DI

Unfortunately there where some more issues;

Fortunately I am good with cars 😉

Aside from all the issues it’s a beautiful car and has very interesting engine technology. It is the same engine as found in several Alfa Romeo models like the 4C, the Giulietta, the Brera, Spider and the 159. In the 4C and Giulietta the lower blok is aluminium with very thin liners from steel, in the other cars the lover block is cast iron and has a bit more weight. In the Lancia the engine produces 200 hp and 320nm of torque. The turbo is a Borg K03 and the automatic transmission is a Aisin Seiki type TF80SC which is used in a lot of different cars like Volvo’s and Toyota’s. The direct injection is manufactured by Bosch.

Although it is te most desired one in the 159 and the Giulietta it’s not al great and halleluja with this engine. A lot of issues are known. It’s a direct injected engine which may cause petrol leaking to the engine oil. Also direct injection will pollute the intake and the intake valves, when ignoring this a piece of carbon build-up can travel trough the engine damaging components. Oil maintenance is very critical because of the pollution, when using the wrong oil or waiting to long there will be a lot of sludge.

An even worse issue is an engineering fault in the oil pick up system. A lot of these engines haves issues related to this. The seal between the oil pick-up tube and the oil-pump hardens up after a few years causing the the pump sucking up air and the system pressure dropping to low. As a result you get all kind of broken parts like turbos, camshafts and other vital components. I wrote an additional blog-post regarding this issue, you’ll find it here!

A very common issue is a leaking valve cover, the plastic part also the engine breather. Also the upper halve of the cylinder head, the part that encloses the camshafts tends to leak. Its is only sealed with liquid sealant. If the cover leaks oil will drip into the spark plug holes causing misfires. If that’s not enough the membrane part of the engine breather can also crack. With most cars and engine type such as the alfa 1.4 t-jet you can buy a new membrane. Not for the 1750 tbi engine, you need the hole part and that cost a fortune in regard only a small membrane is cracked. I had to pay 400 euros!!

The previous owner from Switzerland found the membrane unnecessary. It was missing and he was very generous with Poly Max ® kit.

If you are planning to buy an Alfa or Lancia with the 1750 tbi or 1.8 DI engine ore you just bought one because you fell in love (which is easy because Alfa / Lancia) you might want to check some things.

Look for engine leaks and try to find out the oil maintenance.

The engine oil change interval is kind of critical. Because of the heat a petrol turbo engine produces the oil wears out quickly. Also the oil should be able to withstand petrol pollution. Some people are convinced you should only use the proscribed Selenia oil with the FIAT 9.55535-GH2 SPECS. I use Kroon Specialsynth MSP 5W-40 because this oil withstands higher temperatures and can handle petrol pollution… and it’s Dutch!

When buying check that there is no common cheap oil in it. Try to find out who did maintain the car and call them for the maintenance history. If the seller did it him or herself, he or she probably kept the bills, … well I do…

If you smell coolant try to find out where it comes from, is it an easy fix you can at least talk the price down.

If you bought the car you should start with an oil change, a cam-belt change (trust no one) and an oil pick up seal change. Also check, when changing the filter if this little spring with the plastic part is in place. The filter is in an impossible place so I used my phone camera to check.

If you change the oil seal which you should do every cam belt change or buy one of my upgraded parts, you have to remove the oil pan. To do so you need a special M6 ribe bit at least 160mm long. The other bolts are easier to reach but still the funny unconventional ribe format.

With these kind of petrol engines where oil changes are important and have potential issues with the oil supply a worn out turbo is not uncommon. The turbo in my wife’s Delta had 3mm play in both directions so it needed a refurbishment. In my opinion this is a job for an expert. At least someone who can balance the turbo and has access toe quality turbo parts so not the Chinese Ebay stuff. I went to TurboPro in Utrecht not far from where I live. It is not that expensive if you compare it with a new one. An issue with this turbo is also cracks in the cast iron manifold, internally they crack and if so you’ll need a new turbo unfortunately.

If you wait to long fixing your turbo it can kill the engine, from parts flying into the combustion chamber to hydro-locks locking up your engine when a splash of oil passes the seals in the turbo.

Checking the turbo needs the removal of some parts. I found removing the air intake pipe from the compressor side most easy, you can stick your finger in en feel the play.

To bad this turbo disappears behind the heat shield, it looks awesome with the VHT high temp paint in Cast iron color.

The best tool in my opinion for Alfa’s, Fiats and Lancia’s is Multiecuscan, a must have for petrol-heads . I use a similar connector like this one. But more brands of yokitoki China ODB2 connectors will connect it to your latop. There is a list for compatible cables on the Multiecuscan website. You can find out a lot regarding the state of your vehicle, some error codes give you an indication for broken parts, other settings and data give you some knowledge regarding the maintenance interval.

The injectors are a lot f fun so I made a separate blog post with all the ins and outs.

An issue with the direct injected engines is leaky injectors. If you get high of petrol when sniffing the oil filler hole there might be a leaking issue. Also keep in mind you have to replace the seals when removing the injectors. You can find additional information in this blog post.

After fixing all the issues on the Delta and putting everything back together a nasty rattle came from the inlet variator. Big bummer and an expensive fix. This subject also needed an additional blog post!

After fixing everything the car drives amazing. If you hit the gas you get slingshot to your destination. Although it rides a project is never finished so when there is time and motivation I will fix some minor issues in the interior.

Because of the upcoming holiday to France I took the time to investigate the issue of the not working heater. In the end using 3D printed parts was wishful thinking it might stand the heat of an engine.

Fortunately I had a new intake to replace the repaired one and everything works just fine.