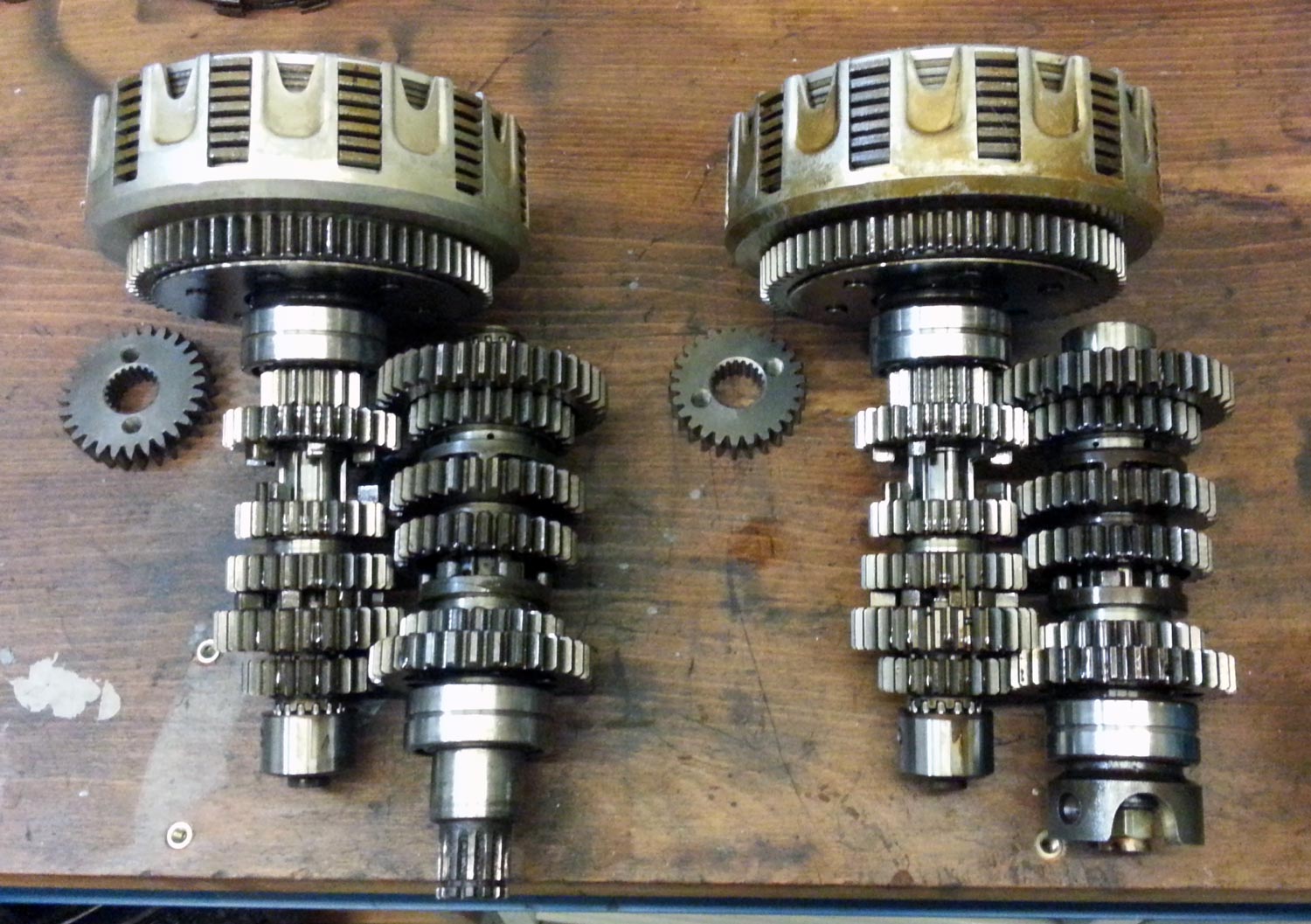 The search for upgrades on a motorcycle is for me the ultimate cafe racer feeling. So not the right tattoos, beard and clip-on handlebars but just to find out how you cab upgrade your bike with the minimum of resources. I have a gt550 and which is going to serve as a basis!

So is my gt550 air cooled and shaft driven. The shaft I find cool and practical, the air cooling I find unfortunate. Many cafe racer purists (yes they exist) find that a cafe racer should be air cooled, I think it should be fast and driving as good as possible. Hence the following idea: I am thinkering a lot on the bike and other Kawasakis and found out that the Kawasaki 550 and 600 blocks are very similar. Whether it’s shaft or chain, water or liquid/air cooled. A 600 engine of a gpx, gpz 550 or zl is about the same as the engines of a KZ, GP or GT, but not quite.

These engines are very similar. There is a KZ with shaft drive, just like the GT. The slightly different one is a sportier GPZ550, which had a bit more horse. These are all designs from late 70 ‘s early 80 ‘s. The engines had a quite long lifespan used in a Zephyr 550 and 750.

The picture above is the engine that was in my GT, got it torn down because it was really worn. I got the motorcycle from a neighbor of a friend of mine. Has been in his backyard for some while and did a lot of kilometers. I found out the engine was refurbished some while ago, found new gaskets, coupling and painted frame. But a few years in a backyard  does a bike no good.

The sportbikes have an engine that is very similar to the ones above. They are water cooled but the stroke is the same, the bore slightly bigger, the gearbox is almost identical, the clutch is almost the same. The engine is from the same origine of the old engines. The good thing about these bikes is they are but ugly and worth nothing making it an awesome parts donor. In Holland a good enough gpz or gpx or is worth maybe 500 euros. The parts might come even cheaper. 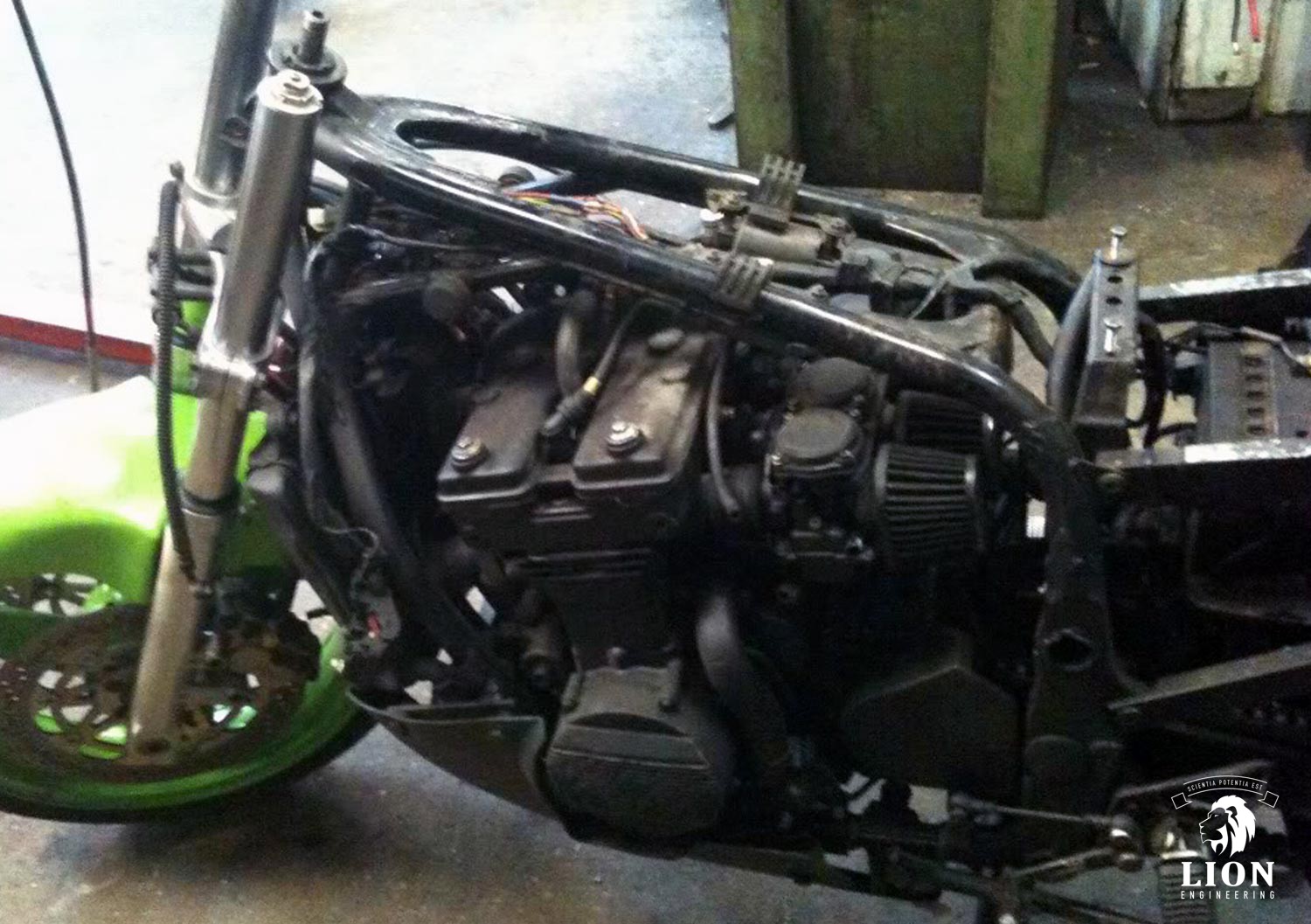 A ZL600 is a in my opinion as hideous as it gets. I actually think all non Harley choppers are kind of fake Harleys … and a Harley is for fat middle aged guys or criminals, please dont take it personal if you are a middle aged fat guy or a criminal, the fact you made it this far on my blog written in poor English makes you cool again 😛 But apart from that, what is great about the ZL is her engine.

The zl600 engine is a slightly powered down version of the GPZ/GPX engine. It has a less pointy camshaft and smaller carbs. Many use a head and the zl600 carbs plus ignition of a gpx. You easily win 10 horse.

My plan is to use the ZL600 gearbox and engine carter, the gpx head with carbs, ignition and cilinder-head. This mounted in the GT gives it that extra horses, less engine noise, less smoke, less gass and the convienice and awesomeness of the shaft drive.

This page will also supplement with  comparison information and other stuff i find out. Always handy for anotherone who considers doing something similar.

The GT550 is sometimes criticised regarding its drive ratio, it will rev quiet high on the highway. The standard GT top speed is 175 km/h, with my 2 cylinder ER5 I make higher figures with ease … and it only has (or once had) 50 horse. For those who continue to drive with an original engine it might be worth upgrading to a different ratio, especially if you are doing a lot of highways. The clutch is equivalent to a gpz/x600r, only the gears are different, the cltch gear on the GT is bigger and the drive gear on the starter shaft is is smaller.

If you own a GT you can use the GPX gearing to get some more top speed and be lower in revs on the highway.

Above you can see the two gear boxes more or less complete. The clutch is the same, just like the gearbox, the difference is in the ratio of the large gear on the clutch. The GPZ is smaller so you end up going a little faster.

The cool thing is that by combining these two gearboxes you get a ZL600 configuration. That’s what I’m going to use. Big fun is it that the GT and its large 18 inch rear wheel against a 15 inch wheel on the Zl.